I appreciate a warning. I can act on a warning. Fair enough if I’m given notice and fail to act, that’s on me. But when it’s a bolt out of the blue…

May began as an exciting, busy month. Our promising yearling colt, Nero WF, was gelded on May 1. Already standing at nearly 15.2hh, he was stunning and we planned to point him towards a dressage career in the long term, starting with some in-hand DSHB classes later this summer and fall. That weekend, we said bittersweet goodbyes to two barn favorites, Squirrel and Violet, as they embarked on new adventures with new owners.

The following week, Sterling traveled to Florida to work with promising young para-driver Chris Carswell at the Southern Drive, and I took Doodad to our first Combined Test at Masterson Station Park, where we placed a strong 3rd and most fortuitously met the ladies of Equi-librium Therapy! Michele and Katie worked on Doodad in the busy lot between the show office and the Salsarita’s truck.

Sadly, the following week, during a storm that blew in quickly, fiercely and during which lightning bolts seemed to be hurled from the sky like javelins, the colt who was our first Waypoint foal was taken from us. I found Nero dead in the pasture early the morning of May 17, with singed hair down the jugular grooves on his neck. He was not near any water sources, trees or other obvious attractants. In the pasture with him were Doodad; his yearling half-sister Notoriously Merry WF (Tori); one of our broodmares Roseglow, who was still heavily pregnant at that time; and our mini donkeys Chuck and Larry. Although they seemed shaken and spooked, they were unharmed, which seemed a miracle.

Life marches on, though – especially at a farm, when you have competitions upcoming and foals expected. Doodad and I headed to the Bluegrass Pony Club CT that Sunday, where we won a competitive Starter division on our dressage score. The sweetest surprise came just a couple days later, when Roseglow gave birth to a beautiful black filly in the same pasture where we’d lost Nero just days before.

May finished as exciting as busy as it began, with a weekend spent at the Kentucky Horse Park for MayDaze, the first recognized Horse Trial Doodad and I had ever competed in. With a good dressage score of 26.3 and clean stadium and XC runs, we finished 2nd overall in Senior Starter, and are looking forward to the move up to Beginner Novice, with encouragement and advice from Kelsey Lee, KY Horse Training! Kelsey has been a wonderful addition to Doodad’s and my training program, helping us with all three phases and definitely increasing my confidence over fences. 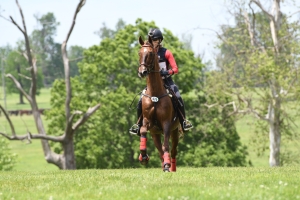 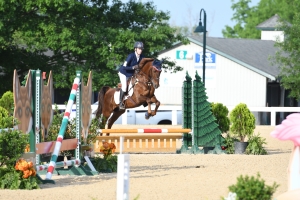 Somewhere in all that craziness we bred a mare or two, and on May 28, Haya (Hart’s Queen Cobra) was confirmed in foal to our stallion Vanando A for 2020!

Here’s to hoping June brings more of these black blobs on an ultrasound and a successful debut at Beginner Novice.

View all posts by Waypoint Farm